If you follow my social media channels, you’ll know that apart from carpet & upholstery cleaning, I often get asked to renovate Victorian tiled hallways.

I’ve long been a fan of these striking entrances to homes in our area.  The geometric patterns are always fun and rather satisfying to work on – rather like a huge jigsaw puzzle!

The Victorians weren’t the only ones who like a tiled entrance hall.  Long before Queen Victoria’s reign, medieval Britain and Cistercian monks in the twelfth century were quick to utilise the skills of talented craftsmen.  Many magnificent tiled floors were created to adorn important churches and ecclesiastical buildings.

Roman remains of exquisite mosaic floor tiles were recently uncovered, buried beneath a farmers field, in Rutland. The tiled flooring was in remarkably good condition considering its age and the discovery caused quite a stir amongst international archeologists. In fact, when you think about it, we’re often inspired by the Romans and their love of tiled floors, hallways and bathrooms, even today.

It seems that tiled hallways in churches, palaces and notable building were never out of fashion for long.  The Gothic revival, in the second half of the 18th century and through the 19th century, also saw an increase in the use of decorative fleur-de-lis and quartrefoil designs.  And you don’t have to look far to find examples of the Gothic revival.  Just take a look at the Houses of Parliament, Liverpool Cathedral and Manchester Town Hall, amongst many others.

Victorians adopted grand staircases, stunning sash windows, cast-iron fireplaces and high ceilings in the homes that they built.  But the floor beneath your feet is where the magic lies for me.

Whilst in the past it was cathedrals, monasteries and homes of the wealthy that were adorned with such stunning architectural features, now it was the turn of family homes to benefit from the style. 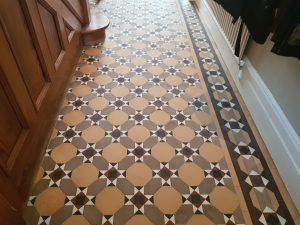 Mr Herbert Minton found the Gothic patterns irresistible and was soon to become synonymous with Victorian tiled hallways.  He helped develop the industrial techniques to reproduce the ceramics that he’d come to love.  Originally, encaustic tiles were made by layering different colours of clay.  This process ensured that a single tile would contain a pattern that ran the whole way through the tile.

Victorian tiled floors were expensive though.  So, this type of flooring was reserved for where visitors would see it, and by impressed by it.  However, to save money, not all rooms received the same treatment.

The geometric pattern that we’ve become familiar with in a typical Victorian tiled hallways, emerged due to another cost-saving measure.  The encaustic tile was simply too expensive to produce in large quantities for ordinary homes.  By producing a tile with just a single colour, Minton established, when laid together, two or more cheaper coloured tiles could create stunning geometric patterns.  At around this time, the industrial revolution was making it much easier to mass-produce tiles with new manufacturing techniques.  And so began the Victorian’s love-affair with tiled hallways.

You can tell that Victorian tiled hallways are built to last!  It’s only now that they’re many need repairs.  If yours does, you know where I am!